West Australian school students have produced fantastic photos and clever captions in our annual photographic contest which celebrates WA’s unique biodiversity and helps young people to appreciate the natural environment and understand why we must protect it.

Participants from across the State could submit up to six photos in the Chevron Focus Environment competition but no more than two in any of the three categories: WA’s Native Species, Sustainability in WA, and WA’s Habitats and Ecosystems.

Captions and photos together should convey a meaningful environmental message, so judges consider both elements equally when determining who the winners should be. Students from kindergarten to Year 12 captured an impressive assortment of shots, hoping to secure a first, second or third place in one of the four age groups.

See the majority of winning pictures and captions in ED! Magazine in The West Australian (November 16, 2021 edition).

Check out the winning images below:

The John Curtin College of the Arts Year 9 student could name birds at the beach such as seagulls and swans before he could say “Mum”.

“I think he was someone who really inspired me to get out because that was someone I used to watch a lot along with David Attenborough and other wildlife presenters.”

“And they were one of the reasons why I started getting out and getting up close to different things and trying to learn as much as I possibly could.”
Danny’s parents played a part in sparking his interest in wildlife.

“Dad was always watching David Attenborough and Harry Butler, and Mum is a science teacher and she’s always been happy to support my interests.”
A couple of years ago Danny saved up and bought a second-hand Canon Eos camera.

“So the last two years is when I’ve been getting really excited with my photography.”

He is keen to one day work in the environmental field.

“I’d love to do wildlife conservation and surveying for different development areas where there’s bush, and survey to see what different animals are there to see whether it’s environmentally OK to build a development there.”

“I’m so passionate about our unique wildlife here in the south-west of Australia and getting really close to capture all the little details that many people don’t notice.”

“I’m absolutely honoured to be a winner and really excited to see where my passion takes me in the future.”

“What a great photo of a species unique to the south-west of our state,” she says.

“The photo captures a lot about the animal and the forest environment in which it lives and hunts by night.

“The large eyes, so perfectly in focus here, are characteristic of nocturnal species. The gecko needs to detect as much light as possible as it searches out its insect prey.”

Harry Butler, a passionate West Australian naturalist and environmental consultant who passed away in 2015, supported the Chevron Focus Environment competition. 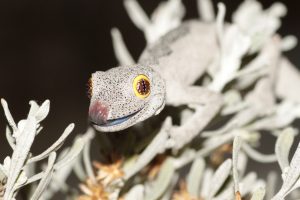 West Australian science ambassador, Professor Lyn Beazley, is a passionate advocate of the natural environment. These awards acknowledge students who demonstrate a connection with WA’s biodiversity and also show promise in their ability to express themselves.