West Australian school students have excelled once again in an annual photographic contest which celebrates WA’s unique biodiversity and helps young people to appreciate the natural environment as well as better understand the importance of protecting and managing it.

Participants from across the State could submit up to six photos in the Chevron Focus Environment competition but no more than two in any of the three categories: WA’s Native Species, Sustainability in WA, and WA’s Habitats and Ecosystems.

Captions and photos together should convey a meaningful environmental message, so judges consider both elements equally when determining who the winners should be.

Students from kindergarten to Year 12 snapped an awesome array of shots, hoping to secure a first, second or third place in one of the four age groups

See the majority of winning pictures and captions are published in ED! Magazine (November 10, 2020 edition), or on the Yagan Square Digital Tower at 1:15 and 6:15pm daily between November 10-24.

Check out the winning images below:

Professor Lyn Beazley believes this photo is the most interesting to look at because the personalities of the birds shine through.

“Capturing three different species in the one photo is quite remarkable,” Professor Beazley says. “I think this is the shot that Harry would have chosen.”

According to Professor Beazley, they can do this because they all utilise different parts of it.

“Having different diets further allows them to co-exist in the same environment. The raven is an opportunistic carnivore — even eating the eggs of the tawny frogmouth — whereas the honeyeater and tawny frogmouth are nectarivorous and insectivorous, respectively.

“Thinking about what might be happening in this photo is also quite humorous. The raven appears to be annoying the tawny frogmouth, quite possibly being the reason it woke from its daytime sleep. The tawny frogmouth looks to be trying to summon up the patience to deal with this annoying intruder. Meanwhile, the honeyeater is wisely staying out of the confrontation listening in from a safe distance.” 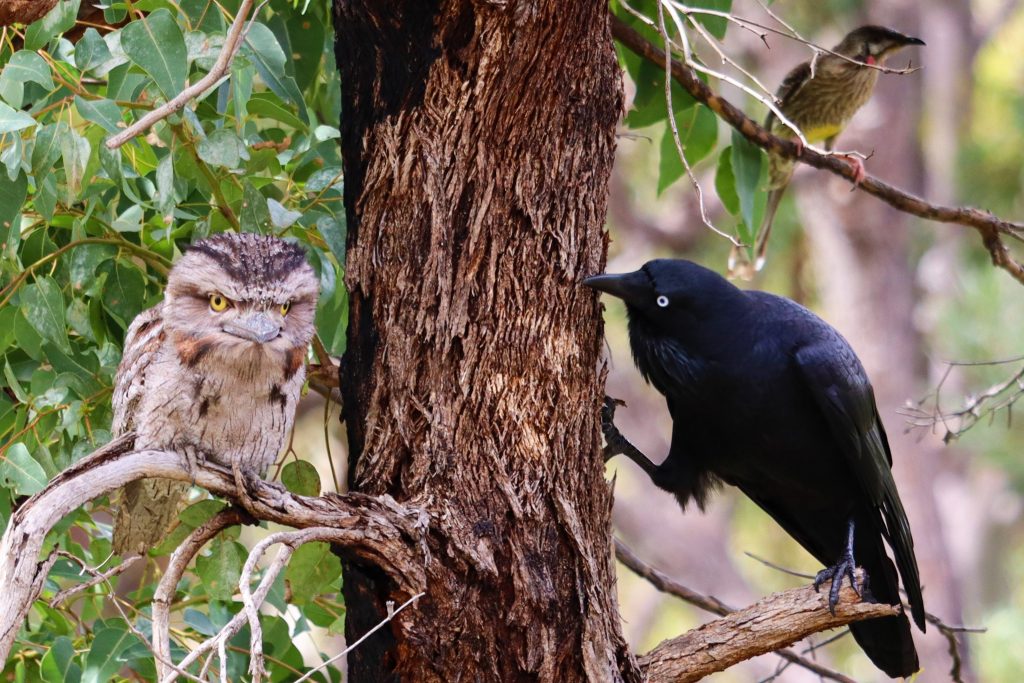 WA’S NATIVE SPECIES, Years 11-12, 1st place / Harry Butler Award
Kyle Berlingeri, Dianella Secondary ESC
COMPLETELY NATIVE: I’ve captured the tawny frogmouth, the raven and the honeyeater all in one photo. All three are native to Australia. Ravens are known predators to the frogmouth for their eggs.

Professor Lyn Beazley is a passionate advocate of the natural environment. These awards acknowledge students who demonstrate a connection with WA’s biodiversity and also show promise in their ability to express themselves through photography.