Seeing a live theatre performance during the school holidays at this year’s AWESOME arts festival was extra special for some in the audience.

Participants in The West’s Rookie Reviewers workshops, part of the international festival’s program, not only experienced a first-class show – they learnt about the art of writing a review and put their own skills to the test.

Before each show, The West Australian journalist Grace Millimaci provided Rookie Reviewers with an insight into the role of being the ‘eyes and ears of the public’ and the process of writing a theatre or music review.

Reviewers are spectators (who watch the show intently), commentators (who describe the show to a reader audience) and critics (who analyse the production) and the first hot tip was for Rookie Reviewers to arm themselves with some background information about their chosen production.

Another important tip was to ‘take lots of notes throughout the show’ so, armed with notebooks, a press pack and press passes to gain entry, Rookie Reviewers watched Ruby’s Wish, an Australian production about a little girl confined to a hospital bed, and Ann-Droid, a high-tech Hungarian 3D show based on a robot girl.

After each performance, the Rookie Reviewers returned to their makeshift newsroom at the State Library of WA to brainstorm ideas about the production with Media Education and to write their report.

Here are some of their reviews: 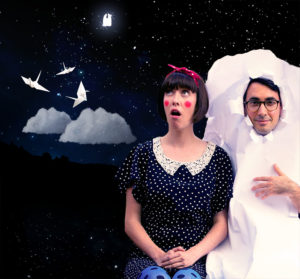 On the first day of October I went to a show at the State Theatre Centre of WA called Ruby’s Wish. The show starred Holly Austin, Adriano Cappelletta and Alice Osborne and was directed by Jo Turner. This extraordinary performance was shown at the AWESOME Arts Festival.

The show is based on the heart-warming real life story of a girl, who is seven years and three quarters, named Ruby (real name changed) who suffered from low blood pressure and was ill for quite some time and in and out of hospitals from a young age. Thankfully she is now cured. Set in a hospital room, the characters portray how Ruby managed to stay positive during her illness. Ruby makes a wish and has expectations to make it come true. She uses her imagination to help her father discover that wishes really can come true.

One of the main props was a puppet, Ruby. There was also the hospital bed, which was used for the Mop Monsters cave and a bunch of other things. The lighting was simple but effective, maintaining the crowds focus on the characters. There was music to occupy the crowd while waiting and many sound effects were used, most of them by Dot.

I believe a few highlights were when they went to the Katy Perry concert and when Dot made a song with beat boxing and sounds of instruments. A few low points were when they showed the animation on the skeleton hand forest as it was not very necessary and also when they introduced the Mop Monster as it was too immature for the audience.

This show was very entertaining and funny. I would definitely recommend it for children over 7 years as the animation may scare younger children. The show made me happy and I left with a very big smile on my face. 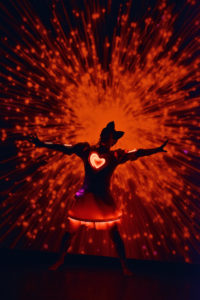 The lights dim, the doors close, the chatter softens, and bam: “Direct from Hungary, and proudly presented by Wesfarmer Arts and 2018 AWESOME Festival, comes Ann-Droid”.

Ann-Droid, performed in the Heath Ledger Theatre, was based on Pinocchio, with Ann, a robot girl coming to life. Joined by Alfred, a playful inventor, Ann discovers what it’s like to be alive.

If you lose love you can always find more, as Alfred, the inventor, found out.

You can be moved, feel slightly scared, and wonder all at the same time in this show. With the help from a wonderful interactive screen you can journey around the house and out into the wide vast world, underwater and high into the sky with Ann, on her quest.

This show was exceptional, amazing, spellbinding, and intriguing as well. This would have taken years, months to perfect. The dancing and acting, it was though the interactive screen was a real world I guess.

There was one part where Bip-Bip the robot ball fell of the stage. I’m not sure if that was supposed to happen though.

As soon as the lights dimmed, the lighting came on. Subtle to intense to subtle. Same with the music, subtle to intense. Ann’s LED light costume was definitely my favourite costume. It lit up when she was coming to life and happy. And it turned off when she powered down.

There weren’t many props. A moving trolley and Bip-Bip were all I noticed. In total, the design elements contributed greatly to the mood. Like when all the glow in the dark things came on.

Furthermore, some highlights for me were when Ann was in the world and it was like a video game, and when the foot mushroom was in LOVE.

A low point for me was the hand trees. I think that scene should have been shorter. I would change that.

On the whole the show was amazing. The acting and quest and plot all flowed. As the show progressed you learned all about Ann and Alfred and his past. I would recommend this show to 5+. 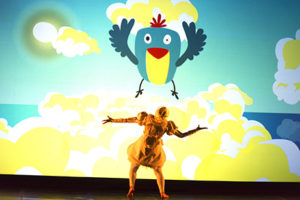 This play is about a father who has lost his daughter in a crash and made a robot to try to get over it.

The play, at the AWESOME Festival 2018 from October 4 to 6, stars Katalin Lengyel (Ann) and Szabolcs Tóth-Zs, who plays the father.

Ann goes on a mission to find a bouncy hand, a walking tap and a mushroom in a sock. She has to go and find them because she let them loose. She has found them all and she comes home to find a surprise in her body. There are so many settings for Ann and the father. Ann is the robot that the father had made to never give up on trying to find someone like his daughter.

The acting includes facial expressions, body movements, hand signals and dancing. The audience won’t know what is happening in the script, because if something goes wrong the audience won’t suspect a thing.

On the stage they had a back screen to change scenes quickly and easily. The lights were sometimes flashing to go with the scenes. Ann’s costume had lights on it to light up when she did something nice. They didn’t have much make up on that the audience can see.

Some of the highlights of the play were the back screen, the props, Ann’s costume and a few others. One of the props they used fell off the stage whilst they were performing, it might’ve been to interact with the audience or it might’ve been a mistake. Something I would have changed would be to have a narrator because some of the bits I couldn’t really understand.

The age group I would rate this to is five and older because of the lights flashing and no talking. If anyone can’t look at flashing lights then I wouldn’t recommend this because there were some bits with flashing lights. This play over all was very exciting, mysterious, intriguing and I loved this play.

Ann-Droid is an emotional play brought to Australia by Bandart Productions, all the way from Hungary. The main characters are Ann the robot girl played by Katalin Lengyel, and also the crazy inventor Alfred played by Szabolcs Tóth-Zs.

Alfred’s daughter died after a car crash and after feeling guilty the dad decided to make a version of her into a robot. This demonstrates never lose hope as Alfred never gave up to find his next love. Since three of Alfred’s creations went missing there is always in a change of setting, in my thoughts because there was so much setting changes in the play they used a projection screen to show were they are because of this there is a lot of extra sound effects and lighting. Sometimes you might have to look away from the eerie lights. If you are taking young children I highly suggest you make sure they are okay with big noises, scary scenes and blinding lighting but you can always pack headphones for them if they can’t stand it and don’t get worried as it is a mime show.

As Ann-Droid is a miming show they need to have way more facial expression because I was mostly at the back and I had no idea what was going on in the story line. I personally do not like miming shows so I think there should be a narrator to tell us what was going on.

The lighting was way too bright for ages 4+ and I left the Theatre feeling depressed about the sad story line so I thought I would stick to comedy acts! The costumes were amazing all of them showed the personality of the characters in different ways. I was not a fan of the 3D projector screen as the set it was so unrealistic.

My favourite part was the most happiest, when he finds his love for her but I hated when the daughter died, I was not in a good mood after that scene. I would try to make the sad parts more cheerful.

I didn’t like it because it was too miserable so I give it 6/10 and I would recommend it for age 6+ so they could get the storyline.

All the way from Hungary, Katalin Lengyel and Szabolcs Tóth-Zs are blooming with creativity in the theatre performance Ann-Droid. Currently showing at the Heath Ledger Theatre, as part of the AWESOME Arts Festival.

Ann is a robot girl, who embarks on a journey around the world to find her friends, Bip Bip, Lolly-Pot, and Foot Mushroom. She explores places she’s never seen or heard of before. Alfred must find Ann to bring her back. This story is one that young children will enjoy. The main characters are Ann, Alfred, and Bip Bip.

The actors used a mixture of dancing, walking and facial expressions to express the feelings of the characters. In the show, there was no talking. The actors used all of the stage, which made the audience understand that Ann and Alfred were exploring.

The music gives the audience a sense what’s going to happen, like if someone’s sneaking up on Ann, the music would sound like sneaky music. The forever changing lighting gave the stage a nice touch. Ann’s costume was very attractive when it was lit up. Alfred looks like he was ready to do some science experiments. No makeup was used. The set was changing since it was on a screen. These elements made the show more engaging.

I thought that when Ann turned into a real girl, and Alfred never gave up, it delivered a message: never give up on your dreams. I would change the no talking direction to more-taking. It would give us a sense of what the characters were thinking.

The play was engaging, exciting, brilliant, well-planned, and beautiful. It delivered a message, it might inspire people, but most of all, for young children.

I recommend this for ages five and up. Parental guidance may be needed.