Our Rookie Reviewers are AWESOME!!!

The West’s Rookie Reviewer workshops, part of the AWESOME International Arts Festival for Bright Young Things (the AWESOME Festival), gave students a chance to watch an amazing live performance and give their opinions of the show in a review.

The workshops, run at the State Library of WA by the Seven West Media Education team, provided students with some background information on the role of a reviewer and how to prepare for writing a review. Armed with a press pass, media release and workbook, students watched either Tetris, a physical theatre performance from the Netherlands’ Arch 8, or From Lip to Lung, a musical performance from Victorian duo Mal Web and Kylie Morrigan. After a chat and photo with the performers, the workshop concluded with discussion of the shows, then planning and writing a draft review.

Here are some of their reviews: 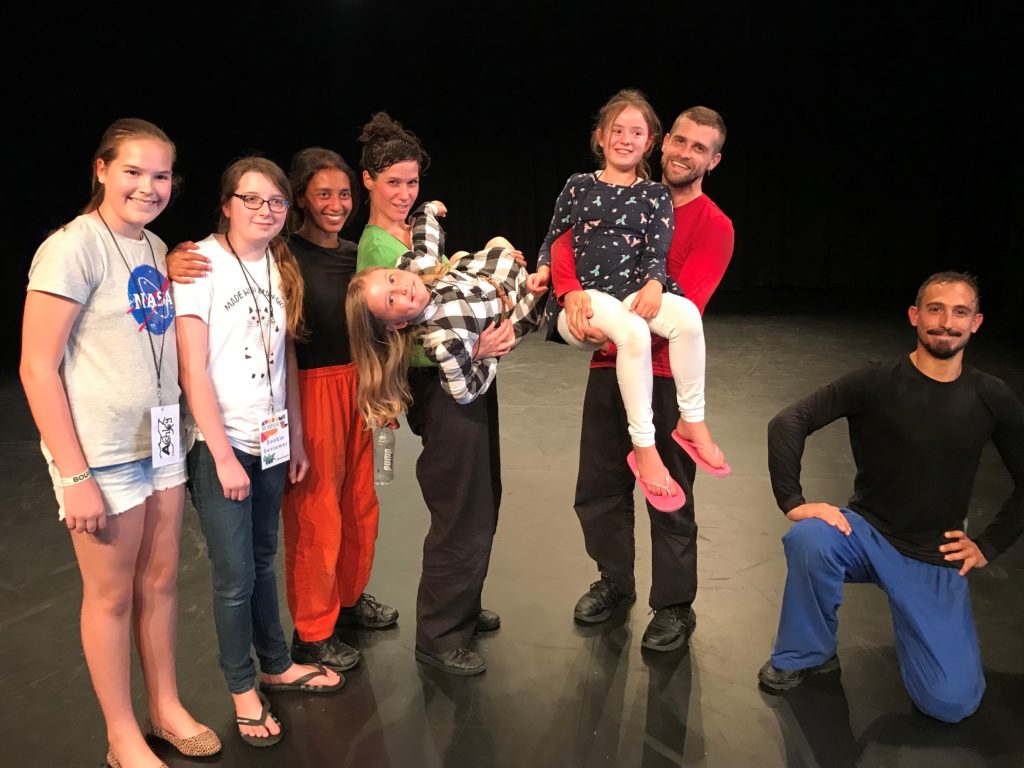 Within the hustle and bustle of the 2019 Awesome International Arts Festival, a line of people made their way into the small theatre, whispering and pushing as they struggled to find a seat. On stage, four brightly dressed figures sat in the dim light. The show was about to begin!

On Tuesday the 8th of October, the AWESOME Festival held the fantastic live show Tetris. This incredible combination of dance, acrobatics, strength, mime and comedy was performed by four Arch 8 performers (there are twelve in total who can perform Tetris) all the way from the Netherlands. The performance really expressed the variety of games they imitated, such as Twister, the Rubik’s Cube and the old video game the show was named after, Tetris.

The show’s impressive display used no props except four Rubik’s Cubes and the performers themselves, who wound and interlocked with each other and themselves. The performers made good use of the props they had, throwing them to each other, letting the audience use them, and even standing on the props. The whole performance was really involving of the audience, the performers’ skill and sense of humour, as well as the four useful cubes. As they could not know what the audience would do, creating this show took great improvisation, as well as just regular choreographing skill. These and performing skills were present here.

The four performers all wore bright coloured clothes as they danced and performed acrobatics and feats of strength in the dim light, to the varying types of music that played from surrounding speakers. The audience watched and listened, amazed and impressed while laughing and gazing. The whole show really included the audience who seemed to really enjoy it, and at the end the performers, while rather sweaty, seemed to have enjoyed it almost as much.

If someone were to ask me personally what the highlights were, I would honestly have to say the whole thing was amazing. The only thing I would change would be that they should give the viewers more of a choice to participate or not, because for the big finale the actors invited the whole audience on stage, and those who didn’t want to weren’t really given the option to stay in their seats. Apart from that, this whole show was great, and was is worth the $15.50 they were charging. I would even pay more for this amazing show with thousands of highlights and almost no lowlights.

As it is probably obvious from the previous paragraphs, I really enjoyed this show and, as far as I can tell, so did the rest of the audience. I would really recommend this show to anyone who wants an amusing show, who wants some fun and colour in their day (Tetris, as well as the rest of the AWESOME Festival) and anyone who… well, just anyone really, from 5 to 505. This show is great for everyone, except (like many performances) young children who may be upset by the loud music, etc.

So, what are you waiting for? Stop reading this review and get your money’s worth at the AWESOME Festival and watch the great live show…
Tetris!

These incredible dancers from The Netherlands brought this classic 80’s video game to life. The dance crew Arch 8 performed at Pica Theatre as part of the 2019 AWESOME Festival and entertained us with contemporary dance, physical theatre, comedy and mime combined as one.

Tetris focuses on three classic 80’s games: Tetris, Twister and of course the Rubik’s Cube. Arch 8 presents these games on stage with its energetically abstract moves and creative dance.

This dancing quartet is talented and choreographed with moves that change from somersaults to shuffling along the floor, being joined to form shapes, then breaking into jumping acrobatics.

The performers were dressed in primary colours and the Pac-Man style classic instrumental mashups kept this Tetris show cubing along.

Watching the interaction as dancers walked through the audience was surprisingly enjoyable. Once on stage they got you into groups to perform a finale that you will never forget.

Arch 8 will entertain you all the way to the end. It was totally AWESOME and over too soon.
I recommend this for ages small and great!
Star recommendation: 4 stars. 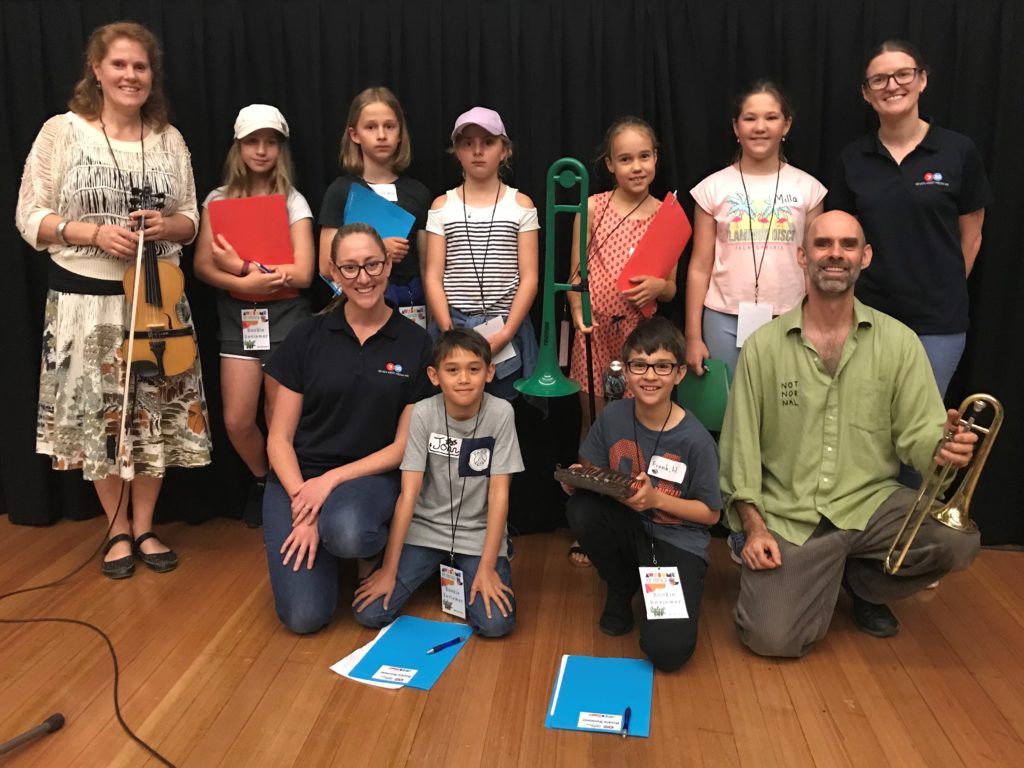 On the 10th of October 2019, Mal Webb and Kylie Morrigan performed a creative and melodic recital at the State Library of Western Australia in the AWESOME Festival. This is an inspiring performance for young fanatics of musical instruments.

This show has introduced me to numerous instruments I’d never heard or seen before, such as the mbira, slide trumpet and chromatic harmonica. Mal has a loop recording foot pedal named Derek, which allows him to record his voice and the foot pedal automatically plays it infinitely until he steps on the pedal again.
Lip to Lung seemed more like it was Mal’s show because he was more interactive with the crowd, but towards the end Kylie started to cooperate with the audience. If Mal hadn’t chosen to be a beatboxer, being a comedian would’ve equally suited his talents. Kylie was impeccable with the violin, and in one of the songs the tune made me think of Aristocats, a film from 1970.

The lights were a typical white in this show, and all the music was just pure from the thespians. Mal and Kylie were so fervent, leaping up and doing funky dance moves. A costume would’ve made it epic! At one point, Mal came up to where we were sedentary and frolicked with the trombone! Unfortunately, there were some technical issues which resulted in a few glitches. The setup was pretty basic but really remarkable when we came down and had a gaze at all the instruments on the floorboards.

The whole performance was irresistibly funny. Even the adults were laughing hard. Mal and Kylie had made the performance for adults and kids amazingly! The songs rhymed and had humorous lyrics. I reckon it could’ve been suitable for all ages. It was such a quirky show, which I admire by the way, and I had trouble taking notes because I was chuckling too much. My favourite song was the bike song, with the drollest verses ever!
This exquisite show is a blast for all ages with extravagant laughter for the whole family. Overall I adored it and I recommend it to ages four and up. I rate this performance four stars.